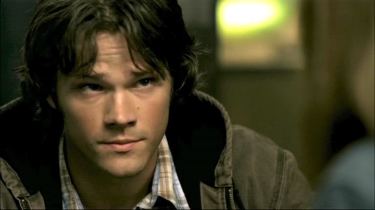 A pre-slash Sam/Dean story set right after season 2, episode 11: “Playthings.” Inspired by too much Phil Collins and by the hook that fanspired, a fellow writer [whose Supernatural slash you should go read, people], planted in my head: I should, she suggested, try writing POV Sammy. And so I have. Cheers, fanspired.

Take A Look At Me Now

When Dean gets depressed, he puts on “Against All Odds” and sulks for a couple hundred miles and then everything’s ok again. He’s ok.

Me? I don’t know. Maybe I’ve had more practice at it, or something, but it’s more complicated than that, for me.

It’s always been all right for him to scream and yell when he’s angry, to punch me or the wall or whatever random creep gets in his way. He’s allowed to be sad or whatever in the same way: right there out in the open, so there’s no question as to how he’s feeling. If he’s pissed, you’ll know it, along with everyone in a quarter mile radius. If he’s happy, then he’s freakin’ ecstatic, and you will be too, because it’s kind of great when he’s like that. He’s great, then.

Doesn’t happen as much as I remember, him being happy, but I guess I’ve been away for a long time.

It doesn’t feel like that, though. Mostly, it feels like I’ve gone back in time somehow, to who I was before. It feels like time has kind of stopped around Dean and now that I’m with him, again, it’s stopped for me, too.

Doesn’t change what’s happened, since I left, of course. Since Jess died. Since he came back for me. And, yeah, in my darker moments, or when he’s being a complete asshole, I tell myself that I didn’t want to come, that he dragged me away from where I was happy. That I can be happy again if I just go back. Go home, or something.

Times like that, I think he couldn’t stand the thought of being alone, when you get right down to it. That I’m kind of like his security blanket, some kind of material reassurance that things haven’t really changed that much. That if we’re together, everything’s gonna be ok–well, as ok as it ever was, for us.

Sometimes I think that he sees me the same way that I do him. That, for him, time stops when we’re together. When I’m around.

But I doubt that he thinks about things–about us, or whatever–in quite the same way that I do. He needs me with him, I think, needs to know I’m close by, because otherwise he’d be alone and worse, I wouldn’t be safe, in his mind. He thinks of me as a totem, a sacred object, or something. I’m He Who Must Be Protected. Period.

But there’s more to it than that, I think.

Which is all well and good, but whatever. Like I said, I’m pretty sure he doesn’t think about things that way. He doesn’t like to reflect on his thoughts or any bullshit like that. Never has.

At least, I don’t think so. Never really wanted to bring it up.

But there was this totally weird moment the other night, and it was my fault and all on me and I know I’m over-reading, because that’s what I do, that’s what I’m good at, that what makes–made?–school so easy for me. Analysis, critical thinking, trying to find new meaning in an old text: that’s me. My comfort zone, or whatever.

That was the problem, at the time. I couldn’t stop thinking, couldn’t stop worrying and beating myself up and so I decided to get drunk.

It’s not that I can’t drink, that I can’t handle my liquor or whatever: it’s that, sometimes, I want to be drunk so badly that I can almost will myself into it. Especially when I want to be so totally out of it that I don’t know what I’m doing, what I’m saying, and best of all, I don’t have to take any responsibility for what I do say, then.

Sometimes, I really want to shut my brain off. To stop being me, because who am I if I’m not the Analytical One? The Thoughtful One? Hell, even with Jess, that was my role, to remember birthdays and anniversaries and to make plans and to be the one to say, no, we have to talk about this, this is important. I was the one who instigated The Talk, you know, when we were in that weird place between friendship and dating. I was the one who said, no, this is important: we need to decide where this is going, who we are to each other, what we want.

Yeah. That was on me.

And it’s not like she never would have wanted to have that talk, it was more like I felt that it was my responsibility to get it sorted out. To figure out where we stood and to make a plan for moving forward. She would have gotten to it, but she was content to be happy right then, you know? To be together and figure it out as we went.

Which is really not my style. Or it wasn’t, at the time. At the time, I wanted organization and details and hell, a fucking map to my future. Wanted to know exactly where I was headed other than Not There. Or, Away From Dad. From Dean.

So I pushed it, I guess is what I’m saying. Pushed her to call herself my girlfriend and to call me her boyfriend and yeah, it worked out really well for awhile.

It was great, actually.

But now, I’m here. She’s dead. Ok. And whatever plans I had, whatever path I’d sketched out for me, for her, for us: they’re gone. Burned to a crisp.

So I’m back here, where I started, where I tried so hard to get away from and what worries me is that it doesn’t feel weird. Most of the time.

Most of the time, it’s actually ok.

I guess I didn’t realize how much I missed him, until he was there, again. The work, whatever. I can do it, I’m good at it, fine. And I like it, I like thinking that we’re helping people. I try not to think about the ones that we can’t. That we haven’t. That we won’t be able to save.

Which is probably where the weirdness came from the other night. That and the drinking, the overwhelming urge to be stupidly, utterly out of it and forget about all of the shit I can’t do, haven’t done, won’t be able to do.

And I tried, I did, I think, because I remember his face in my hands and the complete and utter terror in his eyes and that must mean that I said something, right?

But I can’t remember, exactly. Just woke up sick and dull and sick again and then we were too busy to talk about anything other than the job. Other than staying alive.

Which, looking back, was probably a good thing.

But I’m still down about it, for some reason, even though I can’t imagine, really, what in the hell I thought was gonna happen there that was remotely constructive. I think I’d be nursing a black eye or a couple of broken ribs if I’d actually managed to say anything. To tell him.

Hell, I might be picking myself out of a ditch, sucking fumes as he sped away in the opposite direction, rather there here in the car with him now.

It’s stupid, but there it is.

My physics teacher used to say: science begins by acknowledging what is. It’s ignoring what is, trying to work your way around it, that gets you into trouble.

So. I acknowledge what is. Fine.

Doesn’t mean I have to be happy about it.

But it also doesn’t mean I can be bummed out about it, either, because I can’t be, at least not in a way that he would notice.

He can be all the colors of the fucking emotional spectrum in public, all at once, as loud as he can, and no one gives a shit.

Me? I so much as frown and he’s on my ass about my emo routine and not living life to the fullest and blah fucking blah blah.

If I smile, he wants to know why, because he’s sure it’s because of him.

So I’ll keep my eyes closed for the next fifty miles and pretend that I don’t know the words to every damn song he’s playing, that I couldn’t sing every word just as loud, just as obnoxiously as he can. That I can’t feel every time he looks at me, that little sideways thing he does like he’s fucking Secret Squirrel or something but man, it feels like a goddamn spotlight in my face, his eyes on me like that.

Sometimes it’s good to be the quiet one, I guess. He won’t think a thing of me not talking for the rest of the afternoon, as long as I listen to his stupid jokes at dinner and let him have the remote tonight and keep my head buried in my laptop until he falls asleep.

I am acting normally. I am acknowledging what is, who I am, in his mind.

Pretending that I can’t see what could be. What might have been, the other night.

Nope. As far as he knows, my eyes are closed.

4 thoughts on “Take A Look At Me Now”